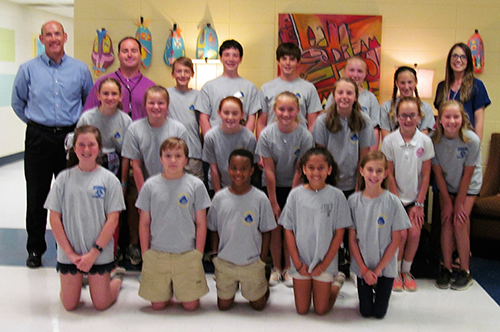 Baldwin Bone & Joint, P.C., the Port City Pacers, McCoy Outdoor Co., Dr. Glenn Glass, and the University of South Alabama Student Recreation Center partnered to collect shoes for the homeless outreach programs of Wings of Life, Discovery Ministries, and the Salvation Army Running Forward program. The campaign, now in its 15th year, got off to a running start in January and concluded at the Azalea Trail Run held on March 24th.

Over the years, the 2,120 pairs of shoes (out of the total of 2,383 pairs) donated by local schools have provided the largest collective donation to this important campaign. The response from schools this year has shown significant growth. Other schools participating in this year’s campaign include: Spanish Fort Elementary (BC), Foley Intermediate School (BC), Stapleton Elementary (BC), W.J. Carroll (BC), Dixon Elementary (MC), and Leinkauf Elementary (MC).

Used running shoes may be donated year-round at McCoy Outdoor Co. on Springhill Avenue in Mobile.

Baldwin Bone & Joint recently awarded Fairhope Intermediate $300 for their school’s PE program for collecting the most shoes in the 2018 Many More Miles Campaign. Student representatives from each class spearheaded the campaign and collected 600 pairs of shoes to benefit the homeless ministries of Wings of Life, Discovery Ministries, and the Salvation Army Running Forward program. Pictured with the student representatives are Greg Shoemaker, Practice Administrator for Baldwin Bone & Joint, Coach Ryan Hymel, and teacher, Emily Steigerwald.

You will need the Adobe Reader to view and print these documents.